A barista is so much more than someone who simply makes coffee. They’re an ambassador for their craft and every single person in the coffee chain: the coffee farmers, the coffee roasters, the green coffee importers and exporters, and so many others. Baristas are at the forefront of their coffee community, building relationships with the individuals that they serve while simultaneously educating consumers about their industry. Charlie is no exception to this rule.

A barista is so much more than someone who simply makes coffee. They’re an ambassador for their craft and every single person in the coffee chain: the coffee farmers, the coffee roasters, the green coffee importers and exporters, and so many others. Baristas are at the forefront of their coffee community, building relationships with the individuals that they serve while simultaneously educating consumers about their industry. Charlie is no exception to this rule.

For as long as I’ve known him, Charlie’s passion for coffee has only been exceeded by his genuine love for people. Coffee is Charlie’s medium by which to not only be creative, but to deeply connect with those around him. He is warm, kind, curious, generous and selfless. Charlie is an exemplary barista in every possible way.

When those of us in the community first heard that Charlie was being deployed overseas, we were all terribly sad. Charlie is an integral part of our Charlotte Coffee Community, a friendly face and kindred spirit to goof off with at local throwdowns, sip an espresso with and catch up on life with. We all knew how much we would miss his laugh, sincere smiles and coffee geekery while he was deployed.

When I caught wind of what he was doing overseas- which you’ll read about below- I just had to get him to share his story on this blog. It took a few months of harassing (sorry Charlie), but it’s finally here, serving as a fantastic reflection of the heart and passion of a barista-soldier-friend that we are all eager to welcome home next year.

I was told eight months prior that I was to be mobilized and deployed. In the time frame of only six months I had to say good-bye to everything I was doing and everyone I loved and cared for, for an entire year. For six months I attempted to put on my tough face. My time felt as if it was actual currency, steadily being withdrawn from a bank account I couldn’t control. I would find time passing faster when I worked bar at Not Just Coffee and passing ever so slowly as I laid at night counting the popcorn on the ceiling of my not-so-cool apartment. Every night as my head fell upon my flat pillow, I thought to myself “I need a new pillow”. And the next thought would immediately be, “Am I spending my time efficiently? Am I with who I love? Am I doing what I love?” Being twenty-two years old, these were daunting thoughts to ponder. Before I knew it five and a half months had passed.

Two weeks until I was scheduled to leave, and anxiety was building within.

I became nervous for reasons that I could not make out at the time. People came out of the woodwork: my co-workers wanted to hang out with me, my long-time friends wanted me to party with them. It felt like a tug-of-war during my final days in the states and, ironically, I was the least responsive to everyone then. People texted me and I’d pretend that I didn’t see it. They couldn’t believe that I was leaving. The hard truth was that I couldn’t believe it either. I couldn’t bring myself to tell everyone good-bye and as the clock drew closer to my departure date, my anxiety pumped harder. I wanted to eradicate it. The only way I could do that was to simply say “no”.

Then came the day. My bags were packed, my boot laces tucked, my face clean-shaven, my hair within regulation, and my patrol cap pressed against my head. That was the day when I put down everything I had in Charlotte and left for duty. I stepped on the plane and took my seat. Lift off: not just the plane but the relief, the weight, within me. The anxiety was over. A feeling too good to be real made its way into my veins. My attention shifted elsewhere: to the new responsibility that was given to me. I was given the honor of putting on the Army uniform to fulfill my tasks overseas.

As soon as the plane landed, I felt time begin to stutter, slow down, and eventually come to a halt. Something was not right. Something was not the way it should be. I was not home. I was not seeing my dearly beloved family and friends. I wasn’t making pour overs. I wasn’t dialing in espresso. I wasn’t pouring cappuccinos and lattes. I wasn’t making visits to The Daily Press and Central Coffee Company. I wasn’t grabbing a beer from Assorted Table or devouring a slice at Pure Pizza or enjoying fresh sashimi from Bonsai Sushi. I was supposed to be telling the Joke of the Day to everyone in the market. I felt my duty was to be behind the coffee bar, slinging drinks, bringing joy to customers and sharing in that joy myself. It wasn’t right to be anywhere else, to be doing anything else. In every possible way of thinking about it, I wasn’t home. The reality of it all came crashing down on me until I finally managed to fall asleep at the end of my first day overseas.

One day I received a package. Jenny Smith, Barista Mama of Central Coffee Company sent me a box filled with coffee goodies. It was like Christmas, except WAY better! I’m pretty sure I shed a tear when I opened up that box and saw everything inside. I was in complete awe. There was a letter from all the baristas there- people that I had met, people that I didn’t know, and people I had served as a barista. Only gentle words were written. I couldn’t fathom the kindness that I had received. Its those acts of kindness that make you question your humanity- Do I really deserve all of this?

Immediately, I began brewing the Ethiopian Kochere coffee that they had sent me. I tried to keep my hand steady but the anticipation I was feeling and the salt water welling in my eyes kept me from pouring my kettle accurately. The last drop finally hit at 3 minutes and 26 seconds. I poured the fruitful, balanced justice into my mug and wafted in the aromas. I sat for a long moment to savor and thank everyone in my thoughts. I drew a sip and nostalgia began crawling out of my heart. I slurped and I swigged and I drank until I couldn’t anymore. Before I knew it, the 400ml of coffee I had so cherished was gone. But the warmth it had given me was felt deep within my core. I couldn’t tell if that was a product of the fresh pour over or if it was simply love.

I couldn’t be selfish and hold it all to myself. I brewed one cup after another every morning from 0500-0700 for the soldiers. I don’t charge but I do ask for donations so I can purchase more equipment. This also gives people in the states a chance to give to the troops: supporting our military, one cup at a time. The soldiers are loving it! It’s a lot better than the Army coffee, which we have a marching cadence about. “They say that in the ARMY the coffees mighty fine (who said that)! It looks like murky water and tastes like turpentine!”

It feels good to be able to serve again, both as a barista and a soldier. And to think that I’m able to do both! I find myself telling my fellow soldiers about the science behind coffee and they are always surprised about how much care we put into our craft. “It’s just coffee,” some may say. But to me, its a transcendental fruit. Can you imagine what it would feel like to look up mountains of green and see the cherry-red coffee fruits growing? A beautiful sight, I’m sure. The hard work the farmers go through to grow, pick and process those beans… The roasters perfecting their crop in those absurdly warm warehouses moving coffee 80 pounds at a time… The barista’s job is to make sure that all that hard work is not put to waste. 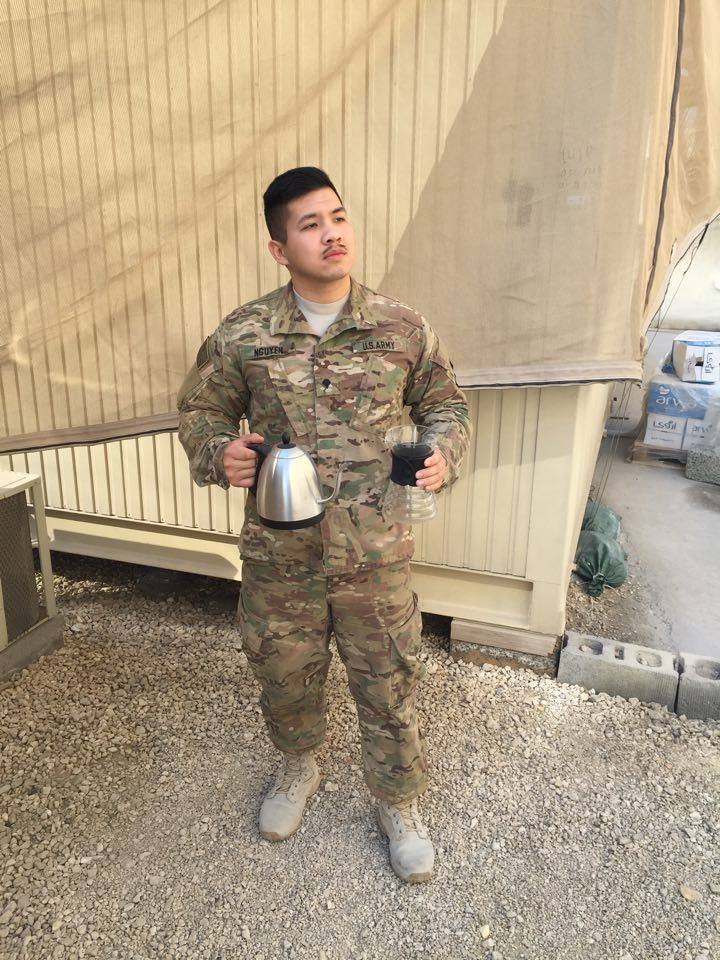 I don’t care what any one else says. To me, it’s NOT JUST COFFEE.

If you’d like to send Charlie a letter or a care package (of coffee perhaps?), please feel free to send it to:

2 thoughts on “The Life of a Barista-Soldier”

I'm an SCA-certified Instructor and Examiner, the Co-Creator and Director of Coffee at Undercurrent Coffee and a huge nerd. Other interests include cuddling with my cats, exploring the Carolinas with my husband, binge-watching Netflix and binge-eating Nutella.